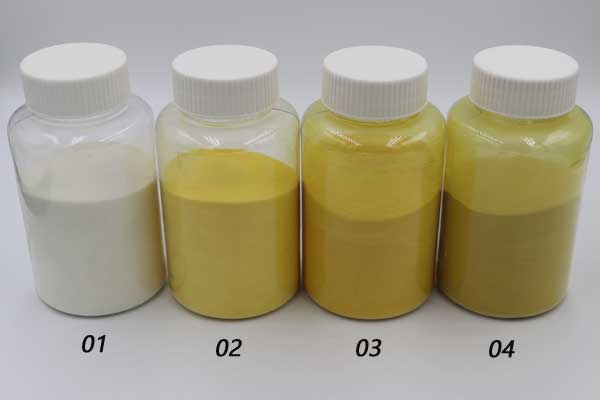 Polyaluminium chloride, also written as poly aluminium chloride, is an inorganic polymer coagulant used for water treatment. Take the first letter of words as abbreviation, it is refered to as PAC chemicals, can be considered as one of the best coagulants. For that PAC coagulant has the advantages of less optimal dosage and less sludge production, which can help to save costs. The polyaluminium chloride for sale in Chemate can be divided into four types according to their AL203 content and basicity. Among them, PAC 01/02 can be used for drinking water treatment, while PAC 03/04 can be used for industrial wastewater treatment. Have some questions about this chemical and would like to know the quotation? Feel free to inquiry us for more.

Technical Specifications of Polyaluminium Chloride for Sale in Our Company

There are four types of polyaluminium chloride for sale with different content of AL2O3 and basicity. Among them, PAC 30% 01&02 is used for drinking water treatment, while PAC 30% 03&PAC 28% 04 is used for industrial wastewater treatment. The four types can be easily distinguished by color, from white, light-yellow to deep-yellow. If you don’t know how to choose the suitable type, email us to tell us about your uses and more requirements, our professional sales manager will reply you and give you advice quickly.

Know About the Applications&Classification of PAC Coagulant

Used in papermaking industry. In addition to the use for sewage and clean water treatment, its main function is to be used as rosin neutral sizing precipitant and retention aid, filter aid, also used to control well-known obstacles and as a catching agent for anionic impurities.

Used in textile printing and dyeing industry. The wastewater produced by the textile printing and dyeing industry has the characteristics of larger water volume, deep color and high content of organic pollutants, which is one of the more difficult to treat wastewater in industrial wastewater. The addition of polyaluminum chloride can form dense and large alum blooms in the wastewater treatment process. In addition, the sedimentation speed is fast, and the treatment effect is obvious. PAC chemical can also be used for the anti-wrinkle function of cloth.

Used in the mining industry. Mainly used for ore flotation, which can act on mineral separation. It can separate water from gangue, which is convenient for water reuse.

Used in agriculture. The soil surface of soil crust has the properties of high density, small pores, low saturation and hydraulic conductivity, which can hinder the infiltration of soil water, increase surface runoff and hinder seed germination. The role of polyaluminium chloride is to increase the soil moisture content, inhibit the formation of soil crusts, as well as increase water infiltration.

Used in aquaculture. The addition of PAC coagulant can precipitate and remove a large amount of organic matter in the water body.

Polyaluminium chloride coagulant has strong bridging and adsorption performance. During the hydrolysis process, it will be accompanied by physical and chemical process such as condensation, adsorption and precipitation. The fundamental difference between polyaluminium chloride PAC and traditional inorganic coagulants is that traditional inorganic coagulants are low-molecular crystalline salts, while the structure of PAC coagulant is composed of multi-element carboxyl complexes with variable morphology. Poly aluminium chloride coagulant has the characteristics of fast flocculation and precipitation speed, wide applicable PH range,non-corrosive to pipeline equipment, obvious water purification effect. It can also effectively remove SS, COD, BOD, arsenic, mercury and other heavy metal ions in the water. PAC chemicals can be widely used as coagulant in drinking water treatment, industrial water treatment and sewage treatment fields.

It is adapt to a wide PH value of the source water, the applicable PH range is 5-9. That is to say, it can achieve the coagulation effect in the range of PH 5-9, and the best effect is in the PH range of 6.5-7.5. When polyaluminium chloride flocculates, the flocs are large, the flocculation speed is fast, the water and iron residues after treatment are low.